It seems like every time I turn around, I see an ad for a meal delivery service and I’ve been curious as to whether they were any good.  As you know, I’m not a fan of premade anything so I had decided to forgo trying them.  Until…

I received an email from Home Chef stating that my stepmother had referred me to the program and, if I signed up, my first box would be free.  Now “free” is definitely one of my favorite things so I decided to give it a go.

Here is my review of the Home Chef Meal Box that I received for free:  the good, the bad and the balance.

I cruised over to the website to sign up.  There was an initial glitch (more about that later) but it was quickly solved by customer service and I was able to sign up with minimal fuss.

There are 7 different categories to choose from: Culinary Collection, Meal Kit, 15 Minute Meal Kit, Grill-Ready, Oven-Ready, Entrée Salad and Protein Pack.  You can also designate desired cook time.  Menu choices can be further narrowed by opting for carb-conscious, calorie-conscious and vegetarian, as well as what sorts of proteins you prefer or food sensitivities you have.  Some kits can be modified in regard to which type of protein will be included.

The choices change weekly, although some of the more popular dishes will reappear from time to time.  The week I looked at had 19 extremely varied options.  The description is very good, noting the items that make up the meal.  Possible allergens and nutrition profile are also included.

The price is noted when you first look at selections (before clicking on the description) so it’s easy to stay within your budget. Both of my choices ran just under $9 per serving, which seems to be the minimum price, while some selections run close to $13.  My box of 2 meals twice weekly (4 meals total) would have cost $49.53 at full price, including shipping.

It’s All About The Food

Now for the important section because it’s all about the food, right?  The two meals I chose were shrimp paella and apple cherry spinach salad.  Each entree provided two servings.

The shrimp paella was an “oven-ready” selection, which boasts no prep work.  I had assumed that this meant it would come pre-assembled in the pan a’la frozen dinners (but not frozen).  This was not the case. All the ingredients were packaged separately so I would have to assemble them myself.

This was not a difficult task and the meal came together quickly.  I simply dumped all the ingredients (except shrimp) into the included tin pan, mixed ‘em up, laid the shrimp on top and baked it for 18 minutes.

The shrimp paella was tasty with the fresh peas, fresh peppers, crispy red peppers, pine nuts and shrimp giving the dish an interesting mix of textures.  The flavor was mild but varied and the shrimp was very fresh.  The packaging indicated that I would have 3 days to cook it although I cooked it the day after receiving it so I have no idea how the freshness might have held up had I waited.

At 468 calories, 44 grams of carbs, 23 grams of protein and 21 grams of fat, it’s well within the guidelines of what would be considered a healthy meal.  It contains 1717mg of sodium, which runs around 75% of your daily intake but higher sodium is a given for prepacked ready-to-eats.  This amount is definitely something you could work around by modifying your intake for the rest of the day.

My second choice was apple cherry spinach salad with goat cheese and sherry shallot vinaigrette.  This was a no-cook selection, although I chose to add on the chicken breast option, which did have to be cooked.

The produce that came with the meal was fresh and unblemished.  The chicken breasts were well-trimmed with no visible fat.  In addition to cooking the chicken, there was a small amount of prep work to be done, namely cutting the apple and the scallion.  It came together in less than 10 minutes.

There was a generous amount of walnuts, dried cherries and vinaigrette, which gave the salad a fabulous flavor.  The only shortfall, in my opinion, was the amount of spinach that was included.  I used both portions of spinach for my first salad and some romaine I had on hand for the second one.  Again, I enjoyed the mix of textures from the apples, walnuts and dried cherries.

The nutrition profile broke down to 460 calories, 33 grams of carbs, 6 grams of protein and 200mg of sodium, all of which play well into a healthy diet.  The 34 grams of fat seemed a bit high but it would be easy to cut back on the vinaigrette, as it was a very generous 3 oz portion.  There was no notation as to how much the chicken breast changed that profile.

The things I love

The freshness of the ingredients is pretty amazing.  I only have this one box to go on but everything I received was high quality and exactly what I would have chosen if I had picked it out myself.

It’s easy.  The ingredients come premeasured and, in some cases, pre-prepped.  All the ingredients you need are in the box so there are no surprises or last-minute trips to the store.  In the case of the oven-ready selections (such as my shrimp paella), they even include the cooking pan.

The food is high quality and delicious.   The portions are generous and could possibly be stretched into 3 adult portions, depending on appetites.

They indicate possible allergens that might be present on the ingredient list for each recipe so there’s no need to go searching for that information.

The price per serving is indicated right up from so it’s easy to stick to a budget.  My box would have cost $12.38 (including shipping) per serving which would be equivalent to eating at a moderately priced restaurant.  If I were to stretch the box out to 6 servings, each meal would cost only $8.25.  I think this is a great value. And guess what makes it even better?  I’ve partnered with Home Chef to give you $60 off your order!

The customer service is excellent.  When I first went in to accept the offer, a box popped up informing me that I already had an account and could not receive the discount.  While this was technically true, I had never ordered after my initial sign-up.  I sent an email to Home Chef to explain this.  They replied promptly to tell me that they had deleted my original account and I would be able to proceed with the offer.

The things I love less 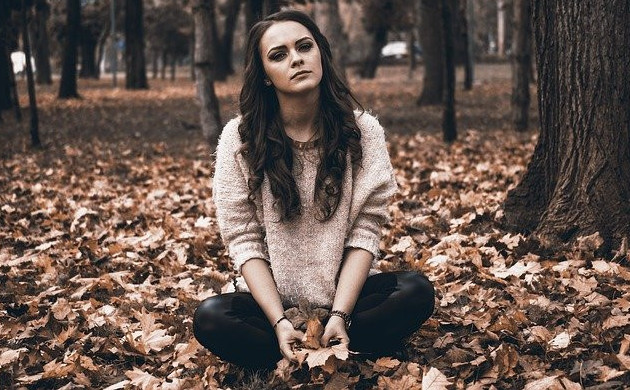 According to their website, Home Chef claims that their ever-changing weekly menus lead them to use different vendors to obtain the ingredients they need to fulfill those menus.  Although they say their ingredients are “occasionally organic” and that they source responsibly “whenever they can”, they are unable to guarantee either.

Despite the fact that they include allergens on their “ingredients list”, the actual lists themselves only include the major players in the recipe but no macro ingredients.  “Rice Pilaf” and “tomato seasoning” were listed on the ingredients list of my shrimp paella but there’s no way to ascertain what these two items actually contained in regard to spices or artificial flavorings/preservatives.  And you know how much that rankles me.

And then there’s the “leftovers”.  I’m a bit horrified by the amount of trash that was generated by 4 meals, as you can see in these pictures. 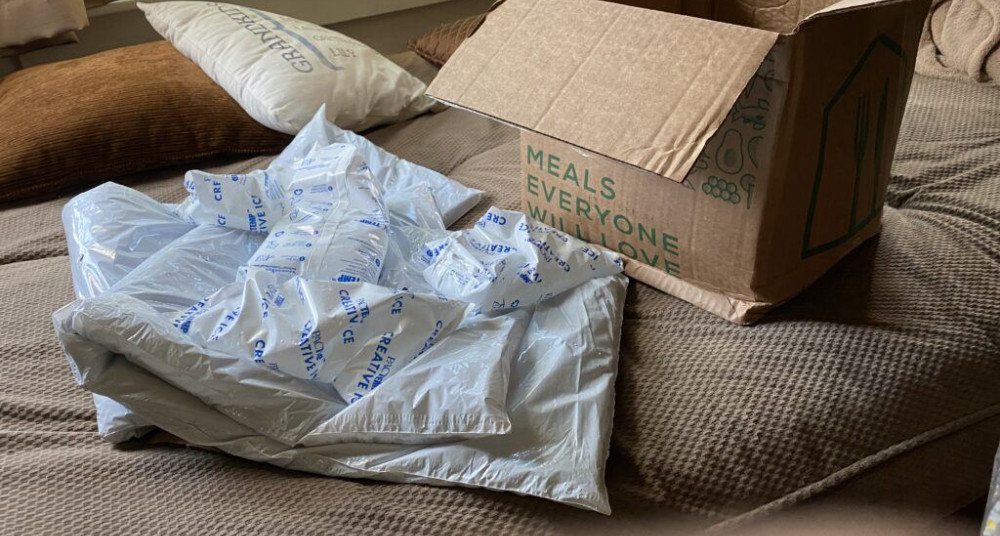 According to the Home Chef website, the cardboard shipping container is recyclable, which, of course is always a good thing.

The insulated liner is made from recycled cotton and denim, which I assume is biodegradable, although this isn’t mentioned specifically in their literature, nor do they address the possible contamination due to the dies used in denim. 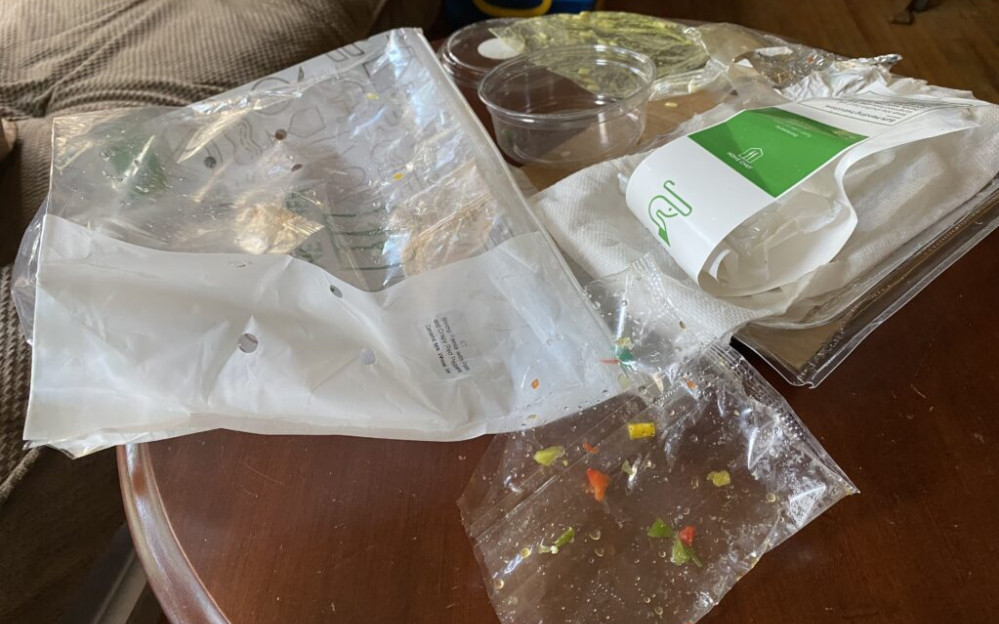 The ice packs contain water and polyacrylate (which is harmless) and can be reused or split open to dump contents down the drain.

This leaves lots of plastic, wraps, bags and containers, which can be more problematic.  I don’t want to delve into world events in this article, but I think it’s safe to assume that we’re all aware that plastics are not as easily recycled as they used to be (and to be honest, some never were). 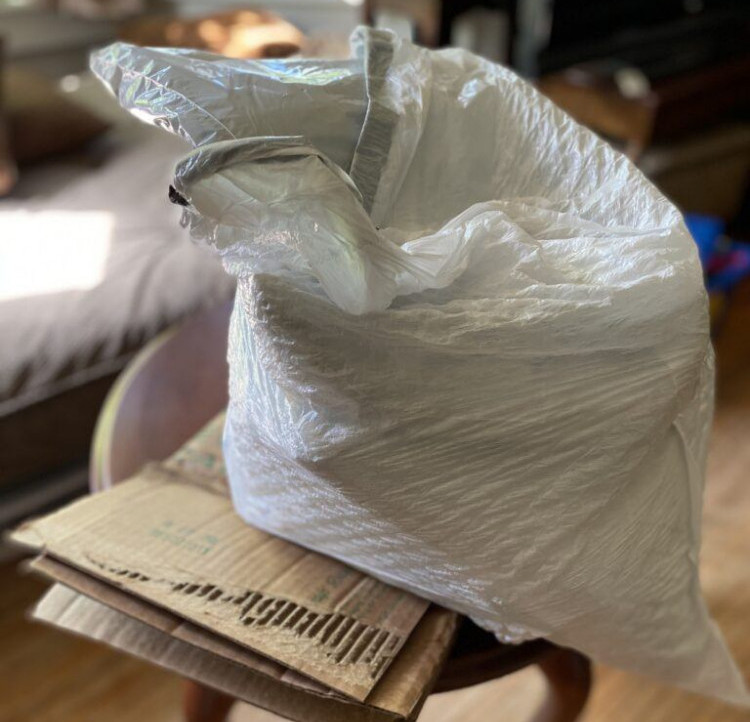 I don’t have any solutions, I’m just saying it makes me uncomfortable to add this entire tall kitchen bag full of trash to the top of the heap at my local transfer station.  This is four meals worth.

What’s the bottom line?  Where do we draw the line between convenience and what are (or may be) negative consequences?  What’s the final conclusion?

The truth is that we make these compromises every day.  Every time we start up our car, everything we mail order, every single item we choose that isn’t locally sourced from small businesses.  Even those locally sourced products, in most circumstances, come at some cost.

In the case of these meals, they may be a blessing to those who don’t have easy access to a store, have limited cooking facilities or cooking abilities.  They may be a lifeline for someone who wants to eat a healthier diet but doesn’t have the time, knowledge or capacity to make that happen on their own.

I, personally, found them to be tasty, convenient and (for the most part) healthy.  I would not rule out ordering again.

Check out My Review of HelloFresh meal kits!

What about you?  Have you ever tried a meal service or do you use one now?  Tell me all about it in the comments below!