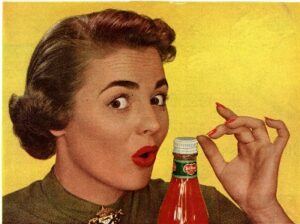 After World War II ended in 1945, the lives of Americans began to change dramatically and for the better.

These were people who had lived through the Great Depression when they didn’t have money to meet their basic needs followed by a war during which they couldn’t buy what they needed no matter how much money they had.

Now prosperity reigned and a new middle class began to emerge. Food was abundant as rationing ended and supermarkets began to crop up in every neighborhood.

Suburbs popped up everywhere and every kitchen in every new home was equipped with shiny new appliances, the likes of which had never been seen before.

And what else popped up?  Come on now, we’ve talked about this.  That’s right…convenience foods!

Companies that manufactured and sold all these new fangled foods were more than happy to assist the modern day housewife in getting the most from this brave new world of modern conveniences.

They began to buy ad space in womens’ magazines and use that space to print recipes that included their products.

I guess some of the recipes must have tasted good but, for humors sake, I wanted to present to you a small sampling of the most cringe worthy vintage recipe ads that I found (in a relatively short time).

The Rise and Fall of Gelatin Molds 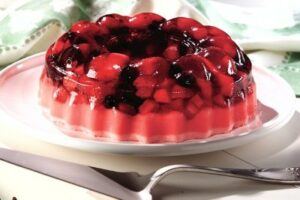 They were so popular there was even a name for it:  Gel Cookery (I kid you not).

I personally remember that my mothers’ specialty was a lime gelatin and grated carrot thing.  I don’t know if there was more to it than that, I just know that I liked the lime gelatin, I could have done without the carrots.

Now the fruity, powdered gelatin products that are available to us today were originally brought into existence back in the mid 1800’s but there was one problem.

Once it was mixed with water, it needed refrigeration to make it gel, which was a luxury most homes did not possess.

With refrigerators finally being available to mainstream America in the 50’s, gelatin finally came into its’ own.

It was fun to make, fun to look at and it was a status symbol, of sorts, to show that you had the appliance needed to actually gel up that concoction.

But for every good idea, there is an equally bad idea out there. Here are just a few: I would not put the words frankfurts and glamor in the same sentence but I guess you had to be there. 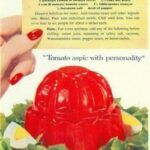 Barbecue salad was a mixture of lemon Jell-O and tomato sauce. Adding onion juice and horseradish were optional.

The ad makes no mention of what one may have served this as or with but they did proclaim it to be “Tomato aspic with personality”. 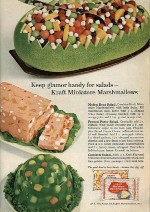 This ad is clever mash-up that  totes the many uses of Kraft mini marshmallows and…well…other stuff.

Another is far more simple: marshmallows and (generic) lime gelatin. I guess Jell-O didn’t pay for a spot in this ad.

Anyhoo…both delightful creations are served on a bed of lettuce because lettuce beds are, apparently, where all fancy desserts are presented. Tagline? “Keep glamor handy for salads”. 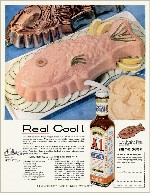 Now I know I’m picking on gelatin molds but I gotta include one more recipe card, this one for Tuna Fish Mold.

Here it is paired the “flavor blessing” of A-1 sauce and it claims to be “Real Cool”. Like, for real, who doesn’t want to eat a gelatinous mound of pureed, canned tuna and tomato soup molded to look like a marine animal?

So…Who Thought This Was A Good Idea? This particular ad is a throw-back to the late 1940’s.  Potato Mor Ring presents Wilson’s Mor, a Spam-like pork product, warmed in cream sauce and served over a molded potato ring.

Mor was toted as being “highly nutritious and ready-to-eat source of vitamin B”. Speaking of mystery meat did you know that when you add Spam to your baked beans “a crisp new flavor is added to an old favorite”?

And much like Wilson’s Mor, it claims to be a magical, healthy food made of pure pork and packed with B vitamins!

I would assume those are canned baked beans as well but it doesn’t specifically say. There’s nothing I can even add to this. I’m at a loss for words. Jellygrill Sandwich is made with Velveeta Cheese and Kraft Grape Jelly. We’re encouraged to “bite into the taste of natural fruit”.

If we weren’t convinced that grape jelly is a fruit the first time they said it, they had to get it in there once again:  “The good rich taste of natural fruit and smooth, yummy Velveeta”.

If you say it enough times, it must be true. We can wash all this delightful food down with a yummy glass of 7-Up and milk.

“Mothers know that this is a wholesome combination. The addition of 7-Up gives milk a new flavor appeal that especially pleases children”.

Or not. While you may be feeling shocked that they’re calling this drink “wholesome” we shouldn’t be too surprised.

This is the same company who claimed their soda was “100% natural” in 2006, a claim they had to drop less than a year later after being sued.

And the trophy goes to… (drum roll, please!)… 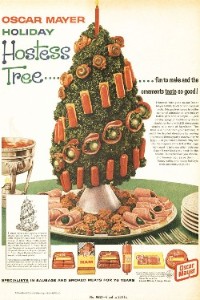 I know I’m a little late with this one but how could I resist?

The Oscar Meyer Holiday Hostess Tree features not one…not two…but FIVE types of processed meat, all of which appear to be served at room temperature.

Mini weiners, mini smokies, canned ham, cotto salami and liver sausage all hang merrily from a holiday tree made of parsley sprigs hand stapled on a cone of styrofoam, into which you have rammed a plastic kitchen funnel.

I think we could still get away with this for New Years, right?

Now THAT Was Fun!

I could go on and on.  And on. But really, we should stop as I’m sure you have other things to do.

I hope you’ve enjoyed this fun trip into the past and, if you have a minute or two, comment below and let me know what weird (or wonderful!) recipe you remember from your childhood!